The Revitalization of Farming with Conservation Farming 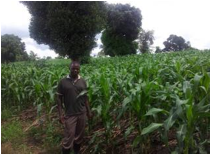 Sendawula had decided to quit growing maize as he “could make nothing out of it”. He vowed to try one more time after attending a REDS CF training session in May 2013 and viewing a demonstration plot. Sendawula’s first maize harvest in 2013B season was so huge that he was not sure how he could store it. He told REDS that his cost of production was US Cents 4 /kg and could sell this for US cents 13/kg.

With such results, Sendawula has never looked back and has converted 5.3Ha to CF hoe basins and regardless of the crops he plants the yield is amazing. He has tried out cabbages, tomatoes, maize and beans and has now concentrated on tomatoes, maize and beans due to the market trends. His once unproductive soils are now healthy because of the nutrients from the crop residue, preserved soil moisture that prevents the crops from stress and the good water catchment in the basins. Sendawula has invested in CF using proper agricultural inputs and his average net income per season stands at US$6,600 which translates to US$1,100 per month. This is unimaginable for a Ugandan smallholder farmer!